The meaning of life: banish the audition blues

This blog introduces the video of Audition blues, the second song on my first album, I know a little place.  Whilst it is inevitable that songs are influenced by the writer’s own life, I owe it my parents, family and teachers to confess that the first verse of my song is untrue – everyone encouraged me to keep asking questions, to understand what life may be about – even if there can be no definitive answer.  I don’t remember ever being just told “because”.  I was told, never be afraid to ask.

The circle of life

Curiously, the first image I chose for the song happened to be a photo I took of the first carving in the circle of life series from the Toshogo shrine in Nikko, Japan of the mother and her child – the mother looking to the future and the child looking with trust and perhaps for answers.  The next appropriate image for me is one of those wonderful open tree-lined roads in France, followed quite naturally by Le Penseur from the Musée Rodin in Paris, concluding with the almost endless beach at Le Touquet-Paris-Plage.

What now, what’s next?

The song, illustrated by some pilgrims in India streaming along the road in their bright yellow saris, alludes to the idea that life can be one audition after another, and to the idea of an afterlife “if we pass the audition, what’s the next part we play?”. Do we get a second chance? – “if we turn out a failure, can we re-audition someday?”  I will never know if the man in his red shirt whom I photographed high in a tree knew what he was doing or somehow had just taken a wrong turning!

Man up a tree

Do we write for our audience or ourselves?

Then a little dig at the X Factor culture “when they see what they want will they know it” – in this video I went back to Shinto shrine in Nikko for the three monkeys who capture for me the idea of going before a judging panel. This 17th century wooden carving is the origin of the “hear no evil, speak no evil, see no evil” proverb, the monkeys being Kikazaru, Iwazaru and Mizasru. How important is the verdict of the judging panel?  Do we write for our audience or for ourselves?  Selfishly I write first for my own pleasure – whilst there is great satisfaction if I get the bonus of others liking my work too! I am very happy that a friend told me he plays it a lot because of the meaning it holds for him.

Go with the flow

The images then indulge in a little poetic or visual licence, as the “river with rapids” and the “canyon with multiple bends” are accompanied by the peace and tranquility of the wonderful backwaters of Kerala in India and the elegant, graceful and dramatic Chinese fishing nets of Cochin (reported to be disappearing). As I wrote the song I confess that the image in my mind was of the (once mighty?) Colorado River running through the Grand Canyon to the Pacific Ocean – but I haven’t got good photos of that! 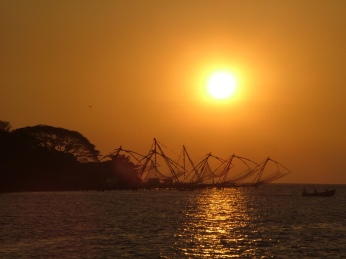 And the reason for living is…..?

So if you want to know the reason for living, well up to a point you will have to work it out for yourself. For me it lies in other people who I love and whose company I enjoy.  It lies in the wonderful colours and sights of the world.  It lies in the ups and downs of life and in the thrill of the chase often made greater by the effort it takes to succeed.  And it lies, most definitely, in words, pictures and music.  Write no evil, draw no evil and sing no evil?